The Song of the Paddle website is a haven for canoeists. We’ve posted our paddling trips there for many years, getting tips, sharing what we’ve learnt.

I posted our most recent trip report in their trip blog section.

Advertisement
Every paddle stroke got us a few feet forwards. But as we took the blades out of the water we lost momentum. The boat started to be tugged backwards, like being on a treadmill. I didn’t think that’s how you trained for a canoe race.

It’s January and Sarah and I are committing to paddling the Yukon together. We’ve drawn out the training plan for the next 2 months and this weekend was our first training paddle proper. A look at how each of us is doing and what we need to learn. We chose the Oxford Circuit cos it’s a looping route that means we don’t have to worry about where to park the car.

We are likely to be doing our training on the River Thames. For most of its length It’s a managed navigation, an adapted river that has locks and weirs to manage the flow. Most of the year it sits at a happy level and boats of all sizes abound. When the river gets fuller and the flows get stronger, yellow boards go up on the locks as a warning. When it’s proper high they put up their red boards and ask people not to use the river unless they know what they are doing.

Red boards for us

We knew the Thames was going to be high. It was probably the fullest we’ve seen it. It was a cold too, so we had the ‘what will make this a safe and good day’ discussion. We checked a few points of the river to know our options. Fast rivers can be fun rivers, but not when you can’t get back to the car. We were happy we had options, but we agreed this wasn’t the day for pace training, we would be working on communication and problem solving instead. 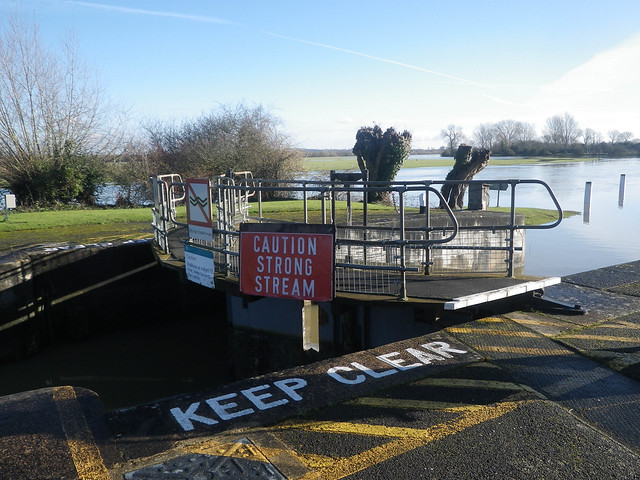 Our first mission was to break into the outflow of a weir – something that usually causes a differing of approaches from the ends of the boat. The front wants a powerful dynamic entry to the fast-moving water, the back wants to gently move into the water lower down the outflow where there is less of a kick. As the front traditionally powers the boat forwards and the back provides the steering, you can see how this may have contributed to frank discussions of paddling ability.
We got it right, you’ll be happy to know. Right meaning talking, trying what we talked about and being happy about the result. Good times; unusual times. So we continued, speeding down the Thames and then turning for the hard slog up the canal that’s a straight run, just two locks to carry around.

Kings Weir – The challenge of the day

Turning off the canal, back to the Thames, we knew the challenge of the day was ahead. Joining the Thames in the flow to Kings lock’s weir, we needed to paddle against the huge flow of the flooded Thames for 100 meters to get us into safer waters. Don’t worry gentle reader, we had several bug-out plans, but we needed to paddle absolutely solidly as a pair to not need them.
It was hard, each step forward was half a step back, but we made it up river to the lock turn off and manoeuvred across the river to the lock channel, never once drifting back panicking or not trusting one another.

Portaging Kings lock itself and some wiggles down the fast flow of the Thames got us back to our starting point. We coffeed and snacked at the lock and decided we were good for the second go-round. This time aiming for a time of less than 2 hours.
The second slog up the canal hurt. Aches in my shoulders and back developed no matter how I sat or how much we swapped paddling sides. I can still feel them a day later as I write this. We made it round the circuit in 1 hour 55 mins. Choosing a route down a mill stream to avoid doing Kings Weir again – we knew we weren’t up to it twice. 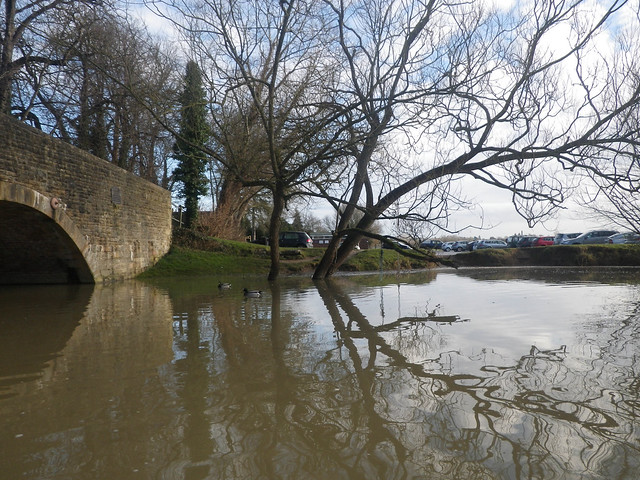 It felt a lot different to our previous paddles. There’s less stopping to appreciate where we are, the cadence is higher, but we are trying to chat more. Listing out puddings, making jokes, creating fun. If I want more communication with Sarah, I’m going to have to help create it. We do go quieter as we get tireder – we’re gonna need to work on that, it’s going to either damn us or save in the race.
Eating and drinking on the move is going to be a challenge too. I could tell I got dehydrated and didn’t eat at the right times. If I’m the engine to get us to Dawson I’m going to need to do that better and build up my endurance. We paddled 14 miles in four and a bit hours. I will need to 8 hours to just cross the lake at the start, and then keep on another 3 days and night down the river.
This is going to take some more work.