For our Easter break we had four days to play with we wanted to go further afield to train. We wanted a river with flow, few portages or locks that slow us down and break up our paddling. We know that in the race we’ll have to stay in the boat eating and drinking for many hours – so staying in the boat was the mission of the weekend.

We decided to return to one of our favourite spots, where we had spent so many lovely paddles: the river Wye. We paddled there at the New Year when the river was in flood. We were hoping to paddle the same distances in lower water test ourselves. It had been bucketing it down so the river levels were up and we needed to have a think of how far we wanted to go.

March had been a particularly harsh month, so we decided not to push things and paddle for 2 of the four days we had.

Friday was all about travel and cooking. Pasta and meatballs is our paddling meal of choice, closely followed by quiche. I like paella or risotto as a pre-paddling meal – there’s alway enough left over for the next day’s paddle. We were staying in a lovely little apartment right next to the river so I got the kitchen and the view, as I cooked up dinner and lunches.

Part of the race training is working out how we are going to feed ourselves whilst staying in the boat and paddling. Having some long paddles is allowing us to work this out and for this paddle we had worked out a system. Each of us has a dry-bag with lots of snacks and drinks. we also have small bags of pasta and rice dishes, and a pop top flask for coffee so we can keep having a gulp of a hot drink without needing to set up.

On the Saturday Kenny from Kenny’s Taxis picked us up and we drove up to Glasbury. With the river being full we planned some long paddles. We knew we had enough daylight that if we made a planning mistake we had enough time to sort it out.

The section of the Wye from Glasbury down is always a favourite of mine – the banks are fairly shallow and the river bed is gravel so there are lots of little bumps and turns to keep us on our toes. 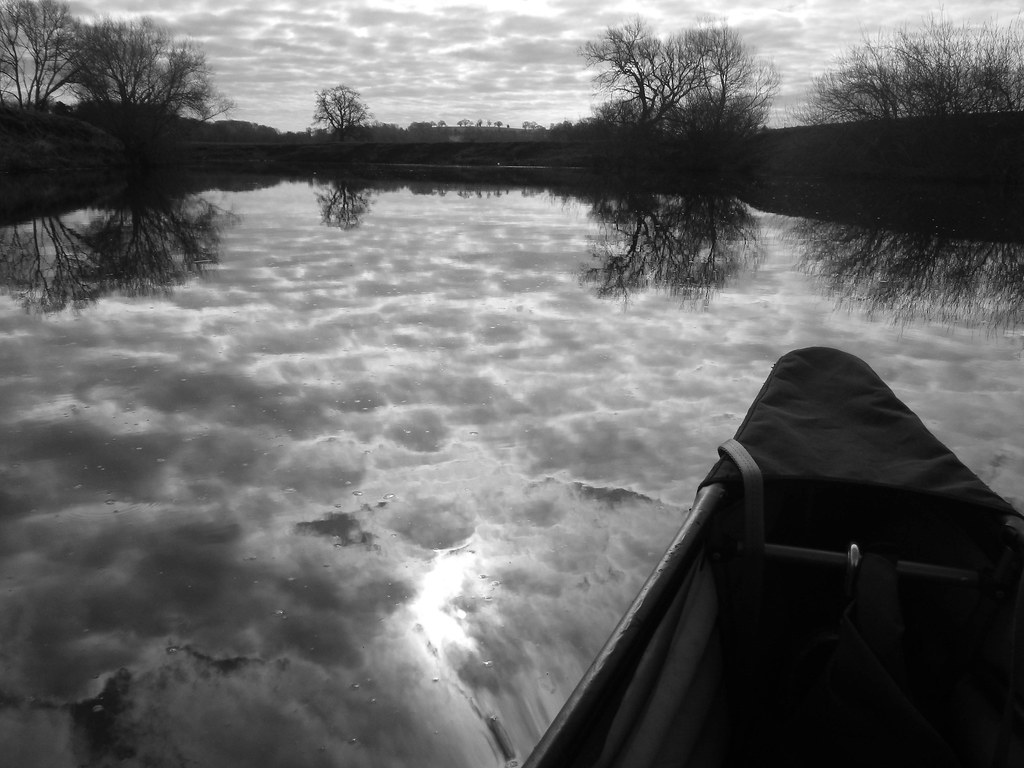 It was a lovely day’s paddle – allowing us to focus on the stronger paddling we’ve been training for – steering together without slowing down. Paddling with power to keep on going, but reducing the pain of the long distance.

We paddled 24 miles and surprised ourselves by being back at the take out at 1pm – clearly either the river or us were going fast. We didn’t get out of the boat all trip but seeing as we were back by lunch time it wasn’t a sufficient test. 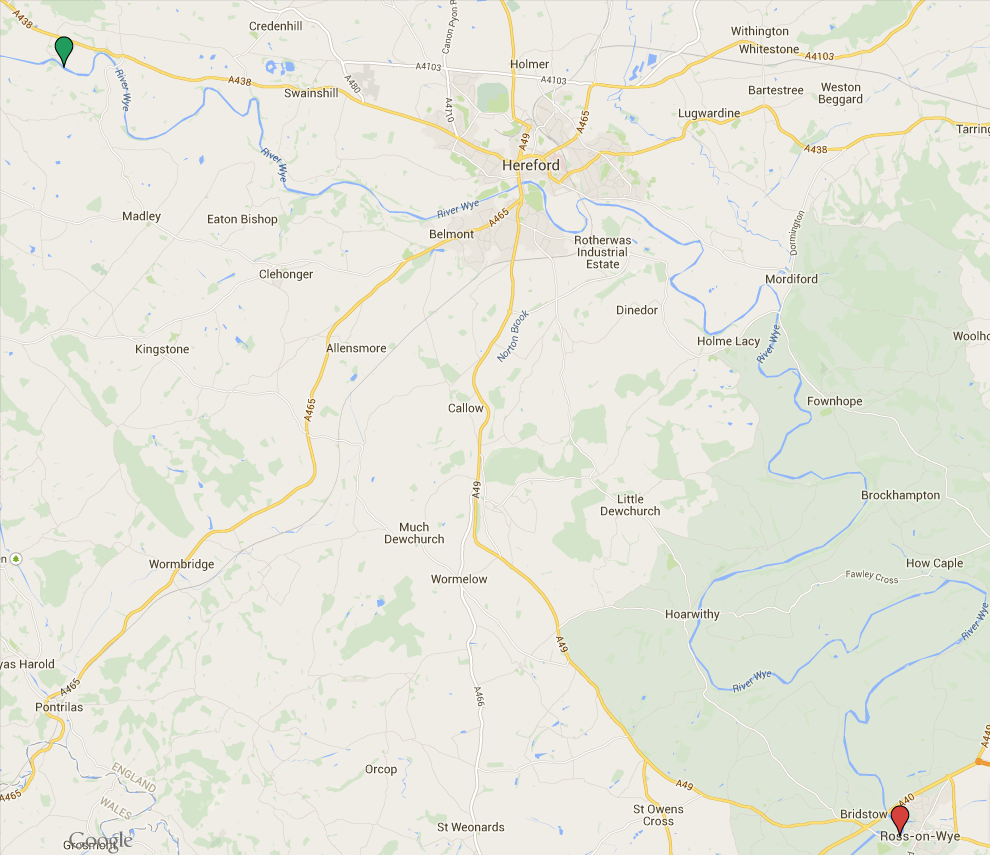 So on Sunday we planned a bigger day. Kenny helped us shuttle a car down to Ross-on-Wye and we were on the river at 9am on the dot, this time trying for 38 mile paddle – the longest distance we’d ever paddled. The river had dropped and slowed a little during the night but we weren’t too worried.

The first stretch to Hereford was a grind. long straight sections with very little flow allowing the wind to become the challenge. I wanted to get out at Hereford for a stretch and a break, but we stuck with it and kept going.

below Hereford bridge the river sped up and I could relax, there are a few little rapids which liven up the paddling and before we knew it we were at the confluence of the Lugg, and we knew we were making good time and reaching a lovely remote stretch of the river . 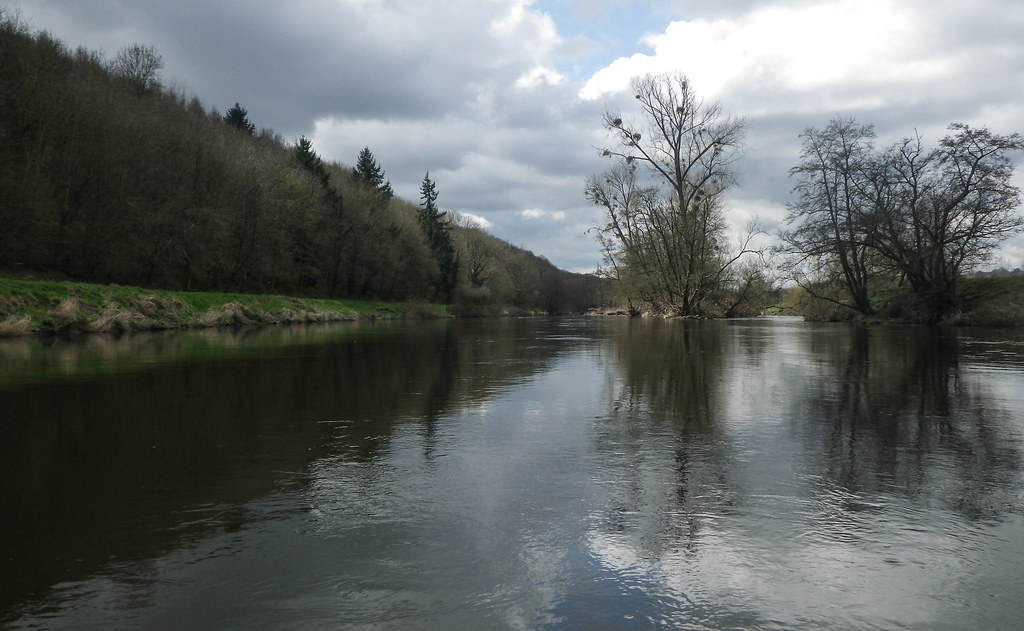 The second half of the day pain set in in the shoulders, and we got a little silly.

It was a quiet day with lots of wildlife and I changed my mind about this section of the Wye. I thought it would be boring but I really liked how lively sections where and how quiet it was.

We paddled 38 miles in 7 hours, staying in the boat all day – target met. The next mission was paddling the same distance without flow, to see if we are ready for Lake Laberge.